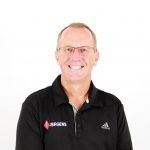 Tim graduated from Michigan State with a Bachelor of Science degree in 1993 and joined the family business that same year. Tim began as a laborer for his father and worked his way up to estimator, then eventually taking over the company as President in 2001.  During his time as President, Tim has led the company, seeing substantial growth through the addition of multiple trades, in order to improve the company’s ability to meet all of our customers needs. Tim continues to be actively involved with the daily functions of the overall company.